Kampala, Paris, 12 April 2018– There was a sudden burst of excitement as the room erupted in a thunderous applause when Amos Mumbere from Ntare School in Uganda was announced as the overall winner in the essay category at the 7th edition of the DStv Eutelsat Star Awards organised by MultiChoice Africa and Eutelsat in Kampala. Tanzania added to East Africa’s tally when Rasheed Taher fromAl-Madrasa-tus-Saifya-tul-Burhaniya school in Tanzania was announced as the overall poster winner. The winning essay was lauded for its simple yet eloquent writing style as it demonstrated an understanding of the application of satellite technology and the role that Sputnik has played in launching humankind into the 21st century. Deceptively simple at first glance, to the attentive eye the winning poster reveals a deep understanding of the topic with a level of ingenuity in using mirror imaging to demonstrate the rapid transformation of satellite technology. 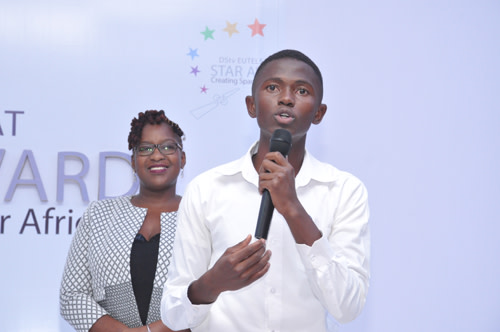 Out of this world prizes

The winner in the essay category wins a trip for two to Paris and onwards to a launch site in French Guiana to witness a rocket blast into space in order to place a satellite into orbit. This is third win in the essay category for Uganda [2011, 2012 & now 2017] adding to a tally of six previous winners including runner-ups in the poster category. The winner in the poster category wins a trip for two to visit the South African National Space Agency and MultiChoice facilities. The two winning schools attended by the overall winners will be rewarded with a DStv installation, including dish, TV set, PVR decoder and free access to the DStv Education Package.

For this edition, students from secondary (high) or combined schools were asked to write a creative essay or design a poster based on the topic: “It’s sixty years since the first satellite, Sputnik, was launched, broadcasting a unique and easily captured ‘beep, beep, beep’ signal. Looking back at this historic moment, write an essay or design a poster depicting how satellites have launched humankind into the 21st Century and acted as a unifier.”

Paolo Nespoli, European Space Agency (ESA) Astronaut who returned for the fourth time as chairman of the jury was assisted by a panel of industry experts namely; Prof. Funso Falade, Faculty of Engineering Dean, University of Lagos; Mr. Michael Niyitegeka, Country Manager, ICDL Africa; Mr. Patrice Paquot, Deputy Regional Vice-President for Sub-Saharan Africa, Eutelsat as well as Ms. Patricia Kiconco, Head of Operations, MultiChoice Uganda. Commenting on the entries, Paolo Nespoli said: “The purpose of the competition was achieved! There were almost a thousand entries from young people across the continent and I believe all the students were exposed, involved and excited about science and technology, satellite technology in particular. The finalists showed an exceptional grasp of the subject matter along with a distinct use of creativity and ingenuity. We all were extremely impressed by the calibre of the work we had to judge. As a jury, we were challenged when we had to pick the winners: it was a mammoth task that took an entire day of intense discussions. If it were up to me I would have given the first prize to all the finalists!"

The keynote speaker was Uganda’s State Minister for Higher Education, Hon. John Muyingo who said: “I take this opportunity to commend the DStv Eutelsat Star awards team for this initiative that has been held every year since its inception in 2011 and particularly for bringing Paolo Nespoli an astronaut and engineer of the European Space Agency. I would also like to recognise that he is the first astronaut to visit Uganda. Mr. Paolo Nespoli you are welcome. I believe your presence will inspire the students especially those interested in the space industry. Your presence will create hope and belief among students that anything is possible in this world.”

All details on the judging criteria, overall winner’s selection are available on the DStv Eutelsat Star Awards website: http://www.dstvstarawards.com/about.html

Entertainment is a powerful way to tell stories that open our minds, bring people together around shared passions, and connect us to new realities. It makes us laugh and cry. It informs, it educates and it inspires. MultiChoice is a video entertainment company, and our purpose is to use the power of entertainment to enrich lives. We make the best in entertainment accessible to millions of households in 49 countries across Sub-Saharan Africa. We do this through cutting-edge technology on our DStv and GOtv platforms – delivering the content our customers love and contributing to the success of local economies. Born and bred in Africa, we are rooted in the countries where our customers live. We are managed and run by local people, and strive to provide all our employees with new opportunities. We’re proud of the contribution we make to our communities, and our business has grown hand-in-hand with local economies by forging long-term partnerships with governments, national broadcasters and entrepreneurs. We want to use our influence and resources to play a positive role in Africa, helping to grow Africa’s people and creative industries into vibrant, economic powerhouses. It’s by creating value for our customers, our employees and society that we’ll build a successful business for the future.