Cape Canaveral, Paris 2 March 2015 – Eutelsat Communications (NYSE Euronext Paris: ETL) announces the successful launch of the EUTELSAT 115 West B satellite. The 2.2-tonne all-electric satellite built by Boeing was lofted into orbit on 1 March at 10.50 EST (03.50 UTC). It separated from the Falcon 9 launcher after a 35-minute flight, with telemetry subsequently received and processed at Boeing’s mission control centre in El Segundo, California.

Speaking from Cape Canaveral, Michel de Rosen, Eutelsat Chairman and CEO, said: “We are delighted to see EUTELSAT 115 West B on its way into space and thank SpaceX for this successful launch. With this satellite we are trailblazing a new era of electric propulsion for orbit raising that opens opportunities for greater efficiency and higher competitivity. It’s another first in Eutelsat’s 30-year track record of innovation that propels our industry onto the next stage.”

Patricio Northland, CEO of Eutelsat Americas, also commented from the launch site: “The EUTELSAT 115 West B satellite will transform the service we can offer clients delivering data services that include broadband, cellular backhaul, VSAT solutions and social connectivity. In addition to delivering high-performance C and Ku-band capacity, our footprint will extend beyond Latin American markets into Canada and Alaska. Tonight’s launch reaffirms us more than ever as the satellite company of reference for the Americas.”

Over the coming three days EUTELSAT 115 West B’s electric propulsion system will be prepared for orbit-raising that is scheduled to commence on 7 March and last for approximately eight months. Following this timeline, the satellite will undergo performance tests prior to commercial entry into service in November 2015.

The satellite will be followed into orbit later this year by the all-electric EUTELSAT 117 West B satellite that will be located at 117° West to boost capacity for Latin America broadcast markets. The third pillar in Eutelsat’s expansion in the Americas will be EUTELSAT 65 West A that is scheduled for launch in 2016 in advance of the Olympic Games in Brazil. It will feature high-power coverage of Brazil and Latin America in C, Ku and Ka-bands.

Established in 1977, Eutelsat Communications (Euronext Paris: ETL, ISIN code: FR0010221234) is one of the world's leading and most experienced operators of communications satellites. The company provides capacity on 34 satellites to clients that include broadcasters and broadcasting associations, pay-TV operators, video, data and Internet service providers, enterprises and government agencies.

Hunter Communications Canada and Eutelsat Americas, part of Eutelsat Communications announce that with the successful launch of the EUTELSAT 115 West B satellite from Cape Canaveral on 1 March, a milestone has been reached for the provision of premium Ku-band bandwidth across Canada.

Eutelsat Communications (NYSE Euronext Paris: ETL) announces that the xenon-ion thrusters of the all-electric EUTELSAT 115 West B satellite have been powered up, enabling the ascent from supersynchronous transfer orbit to geostationary orbit to be initiated as planned on 12 March. Eutelsat’s new satellite was launched by SpaceX on 1 March. 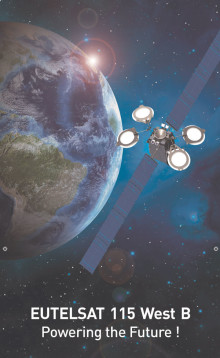