Commercialised by the Eutelsat Americas affiliate, EUTELSAT 117 West B is the second all-electric satellite in Eutelsat’s fleet. It is equipped with 48 Ku-band transponders (36 MHz equivalent) connected to four beams providing premium coverage of Mexico, Central America and the Caribbean, the Andean region and the Southern Cone. Eutelsat’s new satellite complements EUTELSAT 117 West A, launched in 2013, to create a multi-satellite neighbourhood at 117° West, which is already used by Millicom’s Tigo Star, Stargroup and Televisa. It will also provide key services to telecom operators and government service providers in Latin America.

EUTELSAT 117 West B also features a new-generation WAAS (Wide Area Augmentation System) payload operated by Raytheon as prime contractor for the U.S. Federal Aviation Administration (FAA), which will go live in 2018. Developed for the civil aviation community, the WAAS payload is designed to receive signals from ground stations that verify signal accuracy and rebroadcast the information to GPS users, including airline cockpits, the most demanding of civil GPS applications. It will increase GPS signal accuracy from 10 metres to 1-2 metres, thereby enhancing aviation safety for users in Canada, Mexico, Puerto Rico and the continental United States including Alaska.

The WAAS payload is the first to be hosted on an all-electric satellite. It is also the third hosted payload on a Eutelsat satellite, following the EDRS-A data relay node on EUTELSAT 9B for ESA and Airbus Defence and Space and the S-band payload on EUTELSAT 10A for Echostar. 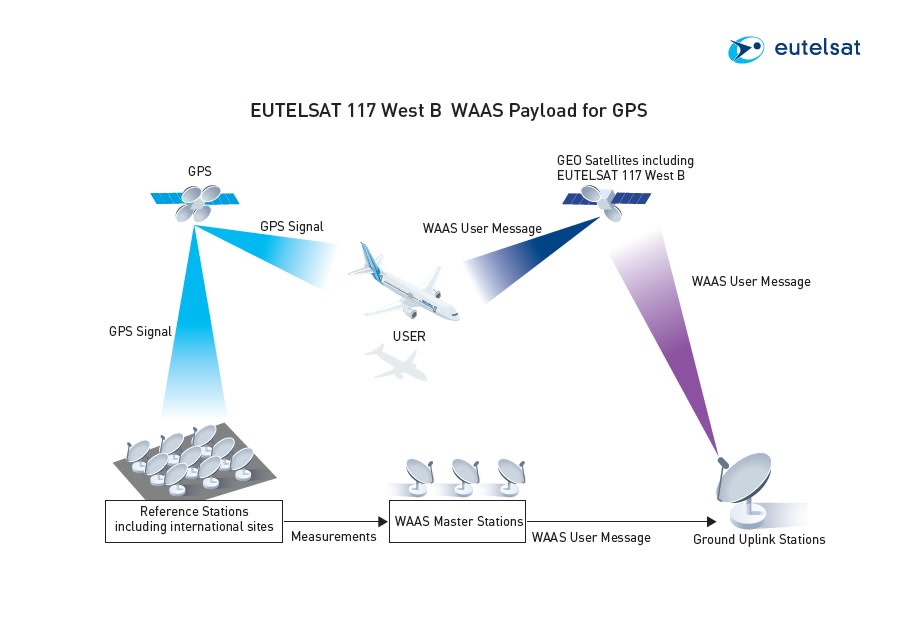