Paris, 1 August 2018 – The Board of Directors of Eutelsat Communications (ISIN: FR0010221234 – Euronext Paris: ETL) met yesterday, chaired by Dominique D’Hinnin, and reviewed the financial results for the year ended 30 June 2018. 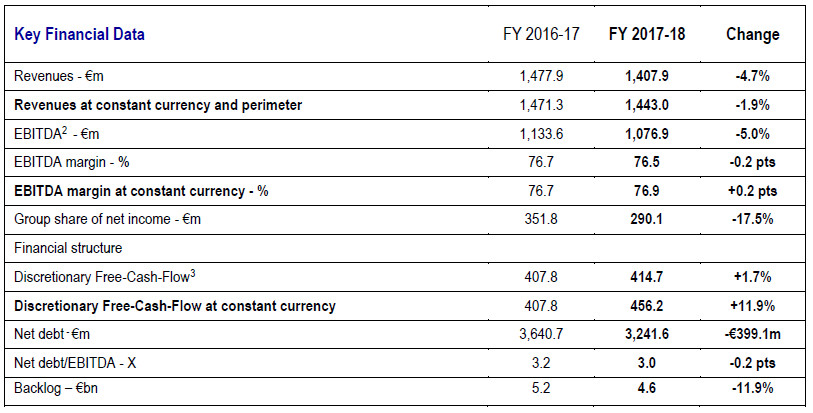 Rodolphe Belmer, CEO of Eutelsat Communications, said: “I’m pleased to report that we fully delivered on all of our financial objectives for the second year in a row. In particular, I would highlight the progressive improvement throughout the year for the five operating verticals. Moreover, in terms of financial discipline, we are ahead of plan on the LEAP cost savings program. Elsewhere, the successful application of our design-to-cost policy – clearly illustrated in the renewal of the HOTBIRD constellation – will enable us once again to reduce our capex envelope in the coming years, while the disposal of our stake in Hispasat enhanced our deleveraging efforts. On the operational front we took an important step in terms of shaping our Connectivity strategy with the procurement of our KONNECT VHTS satellite.

During this year, we also delivered a solid commercial performance which sets us in good stead to achieve our objective of returning to slight revenue growth this year. All our other financial targets are also confirmed, and we are recommending a dividend increase of 5% to 1.27 per share, underpinned by substantial discretionary free cash-flow growth, and as a mark of our confidence in the future of our company.”

HIGHLIGHTS OF THE YEAR

Fully delivering on all financial objectives:

Progressive improvement in trend in the operating verticals

Procurement of KONNECT VHTS to shape our Connectivity strategy

Founded in 1977, Eutelsat Communications is one of the world's leading satellite operators. With a global fleet of satellites and associated ground infrastructure, Eutelsat enables clients across Video, Data, Government, Fixed and Mobile Broadband markets to communicate effectively to their customers, irrespective of their location. Over 6,800 television channels operated by leading media groups are broadcast by Eutelsat to one billion viewers equipped for DTH reception or connected to terrestrial networks. Headquartered in Paris, with offices and teleports around the globe, Eutelsat assembles 1,000 men and women from 46 countries who are dedicated to delivering the highest quality of service.