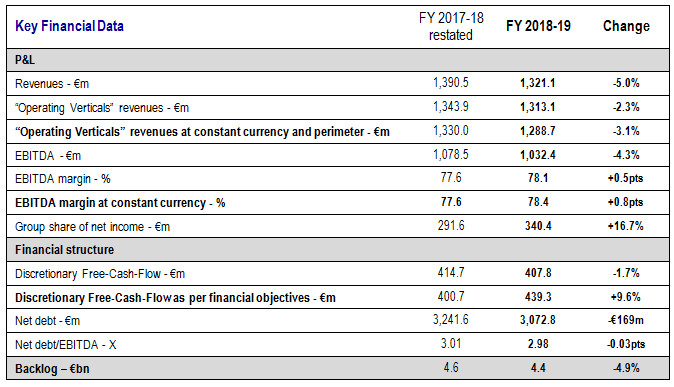 Rodolphe Belmer Chief Executive Officer of Eutelsat Communications, said: “On the operational front, the past year was notable once again for the resilience of core Broadcast, supported by rising channel count and HD penetration. The successful launch of EUTELSAT 7C will bring incremental capacity to the dynamic African market. In Fixed Broadband, our Konnect Africa operations are now up and running and our new distribution strategy in Europe is starting to bear fruit. In Mobile Connectivity, we have carved a strong foothold in the maritime segment with some major commercial wins.

In the context of a challenged operating environment which continues to weigh on the revenues of our core businesses, the effective execution of our financial strategy has enabled us once again to meet or exceed all our other financial objectives with, notably, a record level of EBITDA margin supported by the successful completion of our LEAP 1 cost-savings plan, and the attainment of our Net debt / EBITDA target. By leveraging all elements of cash-generation, we produced a further strong rise in Discretionary Free-Cash-Flow, enabling us to exceed our target a year early.

Our efforts remain focused on maximising cash generation, with the two recent successful bond issuances reducing interest by circa €34 million per annum, the reduction of over €70 million in our annual tax burden, and a follow-on cost-savings program aimed at generating additional savings of €20 to 25 million by FY 2021-22. We are setting a new Discretionary free cash flow target with an objective of circa €500 million in FY 2021-22, and enhancing our remuneration policy by maintaining our dividend at 1.27 euros per share and committing to a share buyback program of at least €100 million by end-June 22.”

Founded in 1977, Eutelsat Communications is one of the world's leading satellite operators. With a global fleet of satellites and associated ground infrastructure, Eutelsat enables clients across Video, Data, Government, Fixed and Mobile Broadband markets to communicate effectively to their customers, irrespective of their location. Over 7,000 television channels operated by leading media groups are broadcast by Eutelsat to one billion viewers equipped for DTH reception or connected to terrestrial networks. Headquartered in Paris, with offices and teleports around the globe, Eutelsat assembles 1,000 men and women from 46 countries who are dedicated to delivering the highest quality of service.