The agreement covers five launches until 2027 and will provide Eutelsat with assured access to space with schedule flexibility at cost effective prices. With this agreement, Eutelsat is the first commercial customer to sign up to Ariane 6, Arianespace’s next-generation launch vehicle, expected to start service from 2020.

This new long-term commitment builds on the previous contract signed by Eutelsat and Arianespace in February 2013, which was expanded in 2017. Under these earlier agreements, three future Eutelsat satellites, EUTELSAT 7C, EUTELSAT QUANTUM and KONNECT, are already scheduled for launch on Ariane 5.

Rodolphe Belmer, CEO of Eutelsat Communications, said: “We are proud to be the first operator to commit to Ariane 6. This emblematic European programme will further enhance our ability to gain access to space in a timely, competitive and reliable manner. It strengthens our relationship with our long-standing partner, Arianespace, which has already been entrusted with the launch of half of our fleet. Furthermore, it illustrates the key role of Eutelsat in the development of the space sector, while underpinning our commitment to enhancing the efficiency of our satellite programmes.”

Stéphane Israël, CEO of Arianespace added: "We are delighted that Eutelsat has chosen Arianespace to launch five of its upcoming satellites, in addition to the three already in our order book. With this multi-launch agreement, Eutelsat becomes the first commercial customer for Ariane 6. I would like to extend my warm thanks to Eutelsat for their confidence in Arianespace and our Ariane 6 launch vehicle. At the same time, their selection clearly shows Arianespace’s ability to offer our customers long-term partnerships and increasingly flexible solutions.” 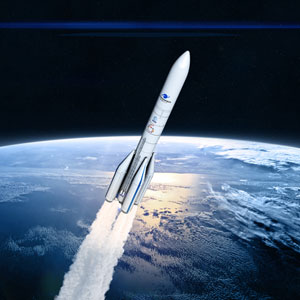 Arianespace uses space to make life better on Earth by providing launch services for all types of satellites into all orbits. It has orbited more than 570 satellites since 1980, using its family of three launchers, Ariane, Soyuz and Vega, from launch sites in French Guiana (South America) and Baikonur, Kazakhstan. Arianespace is headquartered in Evry, near Paris, and has a technical facility at the Guiana Space Center, Europe’s Spaceport in French Guiana, plus local offices in Washington, D.C., Tokyo and Singapore. Arianespace is a subsidiary of ArianeGroup, which holds 74% of its share capital, with the balance held by 17 other shareholders from the European launcher industry.