All-electric satellite to launch in 2019, to set new standards for satellite broadband in Africa

Paris, 28 October 2015 – Eutelsat Communications (Euronext Paris: ETL) today unveiled the next step in its broadband strategy for Africa with the order from Thales Alenia Space of a new-generation High Throughput Satellite offering unprecedented operational flexibility. To be launched in 2019, the all-electric satellite will be the first to use Thales Alenia Space's new Spacebus Neo platform.

Eutelsat’s order of a high-capacity broadband satellite follows its recent announcement of the lease of Ka-band capacity on the AMOS-6 satellite that will enable broadband services to be delivered in Sub-Saharan Africa from the end of 2016.

With this follow-on standalone satellite, Eutelsat will broaden its African footprint, deliver significant resources for broadband services and set a new benchmark for flexibility in High Throughput Satellites. By using the all-electric Spacebus Neo platform, that combines high efficiency and light weight, Eutelsat will also benefit from competitive launch conditions.

The baseline mission of the new satellite is to provide 75 Gbps of capacity across a network of 65 spotbeams that together provide quasi-complete coverage of Sub-Saharan Africa. The satellite will address direct-to-user consumer and enterprise broadband services using dishes from approximately 75 cm. It will also be used for community networks connected to Wi-Fi hotspots, mobile phone backhauling and rural connectivity.

Eutelsat has the option in the coming months to upscale the satellite to significantly increase overall throughput and service areas. Eutelsat’s African broadband business, including sales, will be managed by a newly created London-based affiliate.

Commenting on the contract, Michel de Rosen, Chairman and CEO of Eutelsat, said: “We are excited by the opportunity to bring the most advanced satellite broadband technologies to Africa. With the Spacebus Neo platform proposed by Thales Alenia Space we can push back new boundaries in High Throughput Satellites in order to deliver quality and affordable broadband services in the many countries in Africa where the drive to increase Internet penetration is a key priority.”

Jean Loic Galle, President and CEO of Thales Alenia Space, added: "We are very proud of our selection by Eutelsat to deliver the first all-electric Spacebus Neo satellite. Spacebus Neo combines proven heritage with innovation to offer a fully modular platform with a smart Ka-HTS payload for unrivalled flexibility and maximum throughput. This selection reflects the productive teamwork between Thales Alenia Space and Eutelsat to develop the solution that best addresses user needs and HTS market expectations. This contract is also a concrete result of the support by the European and French space agencies for the development of Neosat as well as by the French Very High Throughput section of the French Investment Plan called PIA, “Plan d’Investissement d’Avenir”. 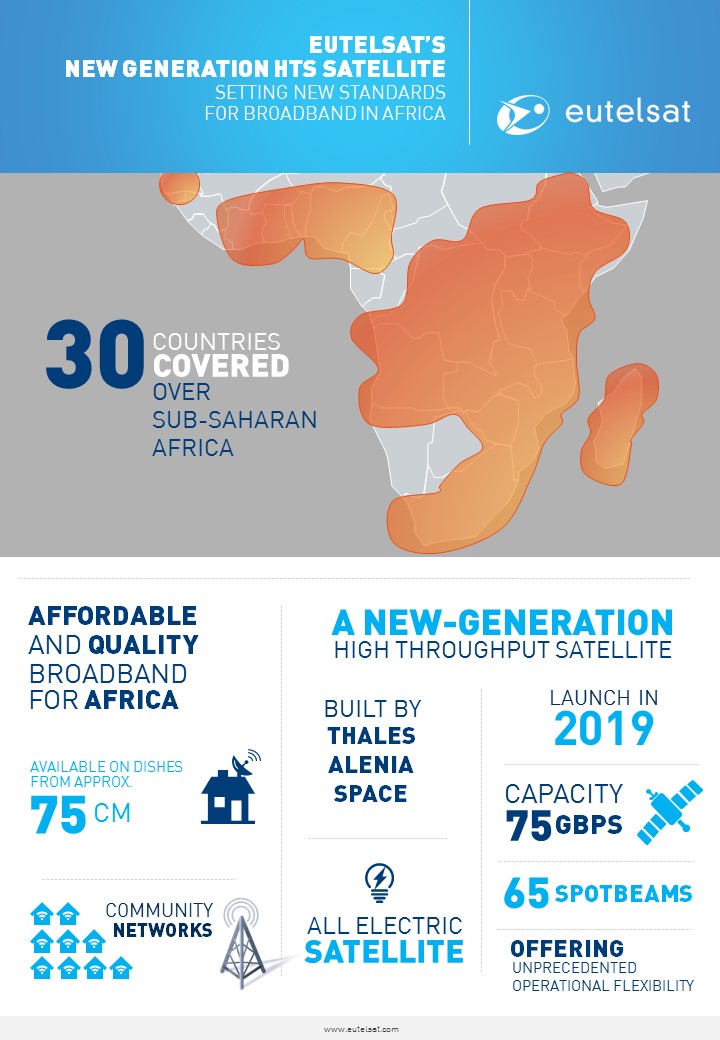