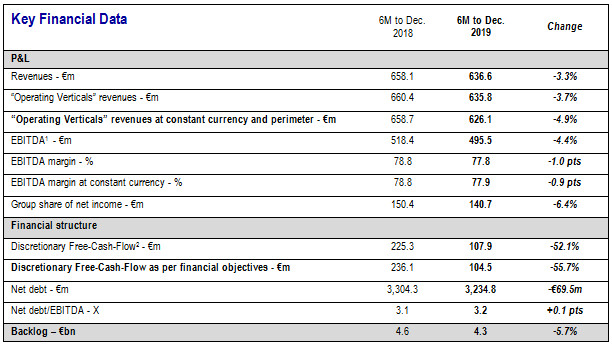 Commenting on the First Half, Rodolphe Belmer Chief Executive Officer of Eutelsat Communications, said: “First Half revenues were in line with our expectations with an improvement in trend in the Second Quarter versus the First and a stabilization in revenues quarter-on-quarter. Despite the revenue decline we delivered an industry-leading level of profitability, with an EBITDA margin of 78%. In recent months we have made strong progress on the development of our future growth levers with the successful launch of EUTELSAT KONNECT, bringing new resources over Africa and Europe and marking a milestone in our Connectivity strategy, as well as the procurement of EUTELSAT 10B with firm commitments on a third of the HTS capacity, highlighting robust demand in the mobility market.

Looking ahead, the remainder of the year will benefit from several revenue tailwinds, notably the EGNOS payload on EUTELSAT 5 West B and the availability of incremental capacity on EUTELSAT 7C, leading us to reaffirm our revenue target for FY 2019-20 as a whole. All other elements of the financial outlook are also confirmed, notably our FY 2021-22 cash-flow target providing ample dividend cover. Moreover, by FY 2022-23, the bulk of our capacity renewal cycle will be complete, giving us increased flexibility to support cash generation and attendant shareholder remuneration over the long term.”