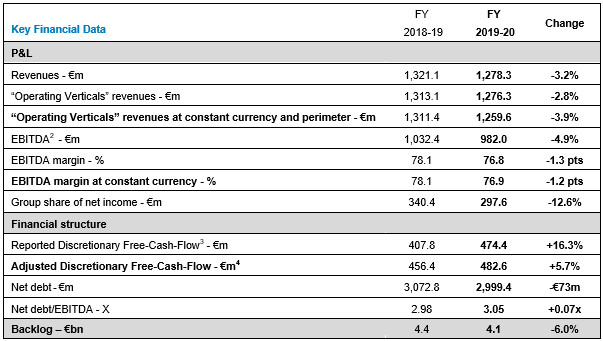 Rodolphe Belmer, Chief Executive Officer of Eutelsat Communications, said: “Eutelsat has produced a robust set of results for Financial Year 2019-20 in the face of the Covid-19 headwinds, with a record level of Discretionary Free Cash Flow and an EBITDA margin that remains industry leading. Our core Broadcast business remains resilient, as demonstrated by the securing of a number of new contracts in Sub-Saharan Africa, notably with Canal+ Ethiopia.

We have also made significant headway in our Fixed Broadband strategy ahead of entry into service of EUTELSAT KONNECT. In Europe, a major wholesale agreement has been signed with Orange for the entire French capacity of EUTELSAT KONNECT and we are adding a retail pillar to our distribution strategy with the acquisition of the European satellite broadband activities of Bigblu Broadband, the leading distributor of satellite Broadband in Europe. In Africa the Schoolap project in DRC highlights the opportunities in the business-to-government vertical.

As a result, the coming year is expected to mark a turning point for our Fixed Broadband vertical, with the ramp-up of EUTELSAT KONNECT, to be followed in subsequent years by further incremental Connectivity capacity, namely KONNECT VHTS and EUTELSAT 10B, adding traction to our return to growth strategy.

We continue to experience the effects of the global health crisis most notably in the Mobile Connectivity vertical and to a lesser extent in Professional Video. Nevertheless our confidence in the resilience of core Broadcast and improving trends in the other verticals enable us to reinstate financial objectives. As a measure of financial prudence, and as previously announced, we are recommending a 30% reduction in dividend for FY 2019-20. We are committing to a return to our policy of a stable to progressive dividend in respect of FY 2020-21,based on the rebased dividend.”

[4]As defined per financial objectives. More detail in Appendix 3.