Eutelsat takes the pulse of TV trends in Middle East and North Africa with latest edition of its TV Observatory:

Satellite TV reception in the MENA region has continued to increase its market-share compared to terrestrial and IPTV, and now reaches into 59 million homes. This represents 94% of the 62.2 million TV homes in 14 Arab-speaking countries, up from 92% only 12 months ago.

Eutelsat’s 7/8° West neighbourhood has further reinforced its pole position, with reach into 56.2 million homes in 14 Arab countries,up 3.1 million homes in only one year. The attraction of 7/8° West for 95% of the satellite homes in the region is driven by an exceptional line-up of over 1,200 Arabic and international channels, with a high diversity of free-to-air content and exclusivity (55% of exclusive channels). This latest audience growth also reflects the expanding offer of High Definition content at 7/8° West, up 34% in 12 months to 179 channels (15% of channels).

The pace of adoption of HD is accelerating in the MENA region, with HD-equipped homes now reaching 28.2 million, up from 17.7 million in 12 months and representing 46% of TV homes. This percentage is even more significant at the Eutelsat/Nilesat 7/8° West neighbourhood where 66% of homes own HD displays.

Michel Azibert, Eutelsat Chief Commercial and Development Officer, commented on the figures: “Our 2017 survey confirms the dominance of satellite as the preferred digital infrastructure across the Middle East and North Africa and highlights key trends, notably the increasing significance of High Definition broadcasting. It also confirms the 7/8 ° West neighbourhood as the prime gateway for broadcasters, reaching into over 56 million homes from Morocco to the Gulf States. In addition to this capability, our complementary HOTBIRD neighbourhood broadcasts almost 80 Arabic channels, making it a compelling neighbourhood for reaching into millions of homes across Europe as well as in the Middle East and North Africa.” 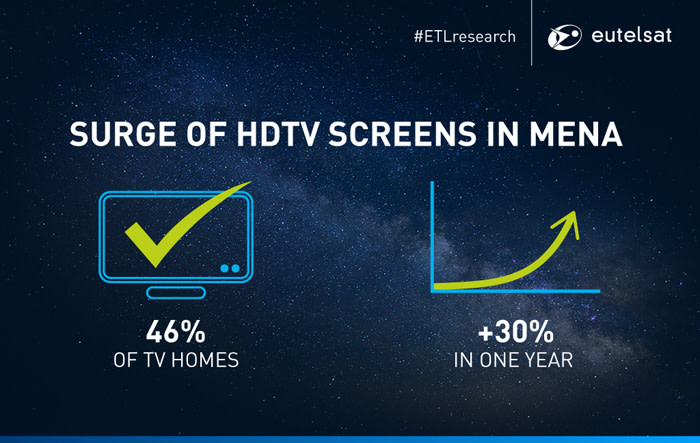 About the Eutelsat TV Observatory

Eutelsat’s TV Observatory is an extensive multi-national analysis of TV reception modes and trends carried in 51 audiovisual markets in Europe, the Middle East and North Africa. Working with IPSOS, new analysis was carried out in June-July 2017 via face-to-face interviews with over 4,000 consumers in Morocco, Algeria, Egypt, Saudi Arabia that account for 70% of TV homes in the region. The study excludes hotels, public administration buildings, hospitality structures and other countries included in the 7/8° West footprint such as Mauritania, Sudan and Ethiopia.

Founded in 1977, Eutelsat Communications is one of the world's leading satellite operators. With a global fleet of satellites and associated ground infrastructure, Eutelsat enables clients across Video, Data, Government, Fixed and Mobile Broadband markets to communicate effectively to their customers, irrespective of their location. Over 6,600 television channels operated by leading media groups are broadcast by Eutelsat to one billion viewers equipped for DTH reception or connected to terrestrial networks. Headquartered in Paris, with offices and teleports around the globe, Eutelsat assembles 1,000 men and women from 32 countries who are dedicated to delivering the highest quality of service.