Paris, Milan, 25 November 2016 – The vibrancy of the TV market and the commitment of TV professionals to produce content that captivates audiences globally were celebrated tonight in Milan at the Eutelsat TV Awards.

Now in their 19th year, the Eutelsat TV Awards is an annual competition that shines a spotlight on what makes today's television great, rewarding broadcasters for exceptional creativity, innovation and audience engagement.

Broadcasting at its Finest

Participating channels were assessed by an independent jury of leading journalists, programme makers and media commentators from around the world. Chaired by Duilio Giammaria of RAI, the jury this year included Russia’s Dmitry Dibrov, the face in Russia of “Who Wants to be a Millionaire”.

This year the jury chose from a diverse line-up of 120 channels from 37 countries. The prize winners were announced at a ceremony in Milan attended by over 350 executives from the global broadcasting industry. 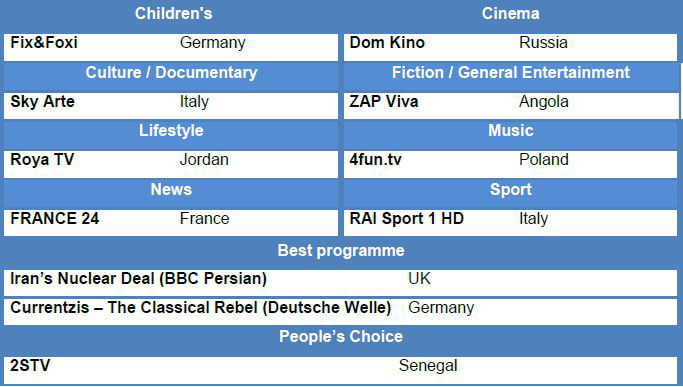 Special award: Tricolor TV in the vanguard of digital trends

In addition to nine jury Awards and the People’s Choice that was won for the first time by an African channel (2STV from Senegal), Eutelsat assigned a Special Award to Russia's Tricolor TV for its inclusive multiplatform strategy, adding new HD content, launching Russia’s first Ultra HD channels, developing non-linear services as well as access to broadband for the many beyond range of terrestrial networks.